Each year millions of basketball fans lust for March and the beauty it holds; and no, I’m not talking about Spring. The month that begins with 15 million brackets being created, and ends with the nets being cut down is debatably the most popular sports time of the year. March Madness is here in full swing, underdogs are continuing to upset the big boys, and Gonzaga is still undefeated. But what about the women’s tournament? What is happening over there? Of course, their games are running smoothly, but the NCAA has really caused a ruckus with the off-court facilities and amenities the women have been granted.

Take a look at the difference in these gyms. The top picture shows the gym the men use, while the bottom image is the equipment the women players were given. Besides the fact that this is almost laughable, it’s embarrassing to the NCAA and has since been a top trending topic on social media. Lynn Holzman, the NCAA vice president, said that this was due to “limited space inside a controlled environment.” (GlobalNews) If this was the case, why wouldn’t they create the space, rather than give different standard areas?

When this picture was posted, the internet took immediate notice, and millions of people were giving their opinions. Many WNBA and NCAA players shared their two cents as well. Sabrina Ionescu, the 2020 National Player of the Year, tweeted: “…Thought this was a joke. WTF is this?!?” (CBS) Both Will Abrams, Director of Player Development at Rutgers University, and Kendric Lindsey, a USC digital creator, were at the facilities and took videos of empty rooms in the complex and questioned the “limited space”. 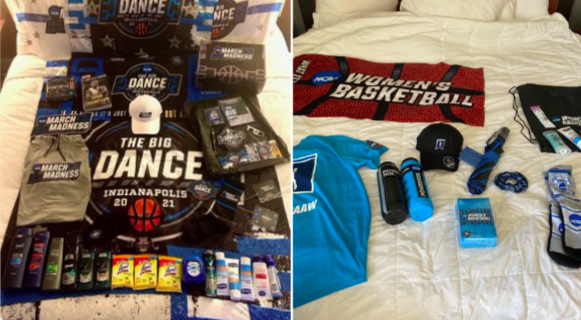 Fortunately, after a week of internet mayhem, the NCAA restructured the gyms to give both the men and women an equal playing field. However, the NCAA then got beheaded again for what they called “swag bags”. The swag bags were simply huge goodie bags and baskets given to each player, except one tournament was gifted much more than the other. Surely, after the first gym incident, you could figure out which group got which merchandise. The difference is more than noticeable and Holzman did have her reasons: “The weather is different in San Antonio than it is in Indianapolis.” (CBS) Although the statement is true, it doesn’t account for why none of the women’s tournament merchandise was labeled with “March Madness” or “The Big Dance”.

To date, the NCAA hasn’t stated a plan of action to fix this issue. But it is making players and fans happy that the association did take action by the public’s insistence through social media. From an outside perspective, it is still nerve racking that the NCAA had plans as such from the start and it took thousands of complaints to make a change. Social media has played a huge part in overcoming obstacles and has truly helped in a situation like this. It’s important to remember that even if it isn’t affecting your life, you could always take part in pushing for change.